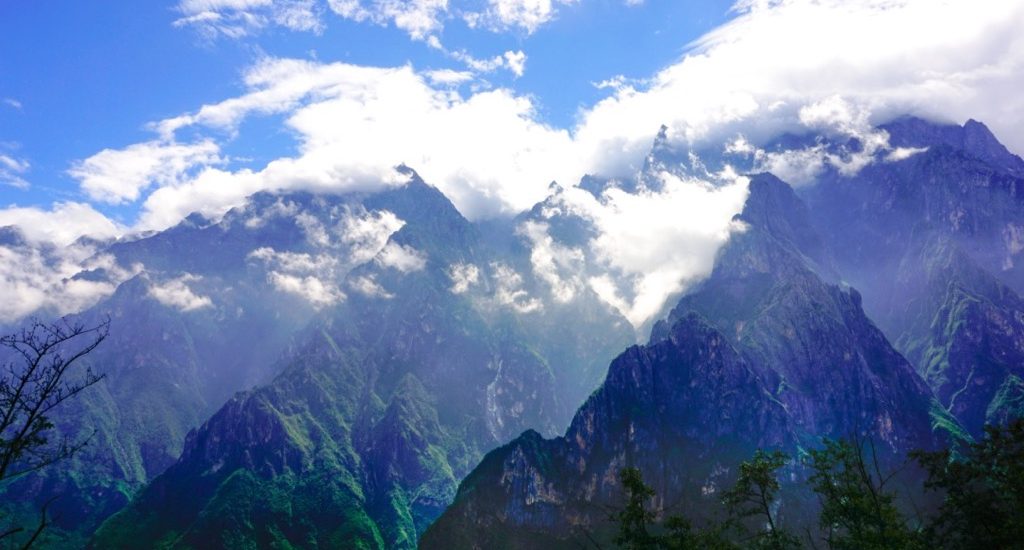 From the moment we read about something called the Tiger-leaping gorge, it was on No. 1 on our bucket list for China. This gorge, or canyon, is formed by the Jinsha river, which will go on and form the Yangtze/Yellow river, which is squeezed between two +5000 m snow-capped peaks. Over time, this has led to a very narrow gorge, with fast flowing water, flanked by nearly vertical walls. At its narrowest point the difference between the river and the top of these cliffs is a stunning 2000m! The beauty of this gorge can be explored by bus or by foot. The latter option is one of the best known treks in China. So that’s what we were going to do!

In the early morning, we were therefore waiting for a bus in Lijiang to take us to the start of the trail. Jessy, the sweet hostess of our guesthouse (the Chen Jie Inn), told us to look for a bus “full of foreigners”. This wasn’t a lie, because when it arrived, we stepped into a bus with more non-Chinese people than we had seen in the previous days combined! And most funny of all, of the 20 people in the bus, 7 were Dutch and one that speaks dutch (more or less ;-)). And with the 8 of us, we immediately were in a lively conversation about our experiences in China so far. A British girl in the back was clearly surprised by the fact that “They all speak the same language!”

The upper trail of the Tiger-leaping gorge leads you from the start of the gorge in “Qiaotou” to the so-called Middle gorge. At this point, you can descend to the river and stand on the Tiger-leaping stone in the middle of the fast flowing river. According to the legend that gave the gorge its name, a tiger used this rock as a stepping-stone to jump across the river and escape a local hunter.

Most of the people on the bus went for a two-day trek to tackle this trail. For the first day this means ascending to an altitude of 2300m. Once this altitude is reached you walk more or less along the side of the mountain until you arrive at a guesthouse of your liking, most likely the Halfway House . The second day you slowly descend again to reach the Middle gorge (preferably) before noon, have a look at the bottom of the gorge and hurry back up to take the bus to Lijiang or Shangri-la in the afternoon. This is what most people do. We, on the other hand, afforded ourselves the luxury to spend an extra night in the gorge. This would give us two days to reach the Middle gorge without any rush, sleep in a small village a little bit down the road, the Walnut garden, and then have an extra day to see the tiger-leaping stone and return to Lijiang. This obviously gave us more time to enjoy the scenery on the way without having to rush to be on time. 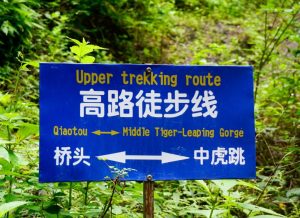 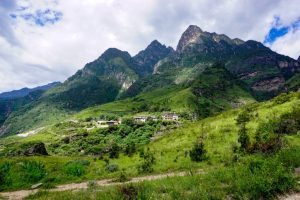 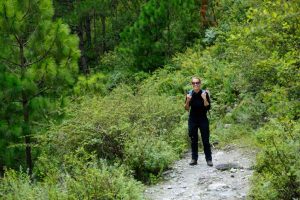 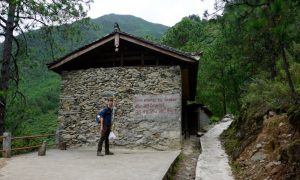 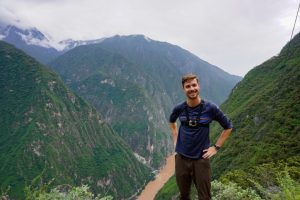 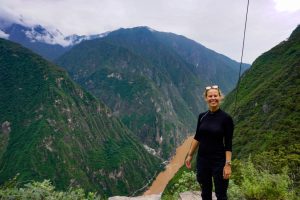 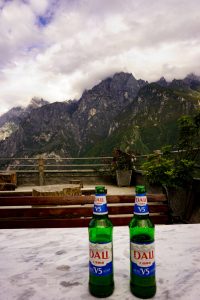 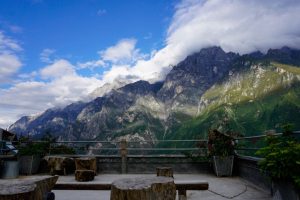 As said before, the first day of the hike would be mostly uphill. Since we had some more time, we quickly let the rest of the people go on while we took photos and had snacks. We also tried to enjoy the scenery, but unfortunately there is a huge construction site on the opposite side of the valley. Apparently this will be the place were the train between Kunming and Lhasa (Tibet) will cross the river. The lack of strict schedule also allowed us to take the steep sections at our own pace. The locals trying to rent horses saw this as a sign that we really needed a horse. But the use of one of the only Chinese words/phrases that we know (“Meiyou” or No/I don’t need it) got rid of them quickly.

This first part was clearly the hardest, with steep sections and although the views were nice, they would get a lot better further down the trek. After a good 3 hours of climbing (indicated as 1.5 hours on our map given by the guesthouse), we arrived at the first guesthouse on the trek. Since it was still early, we decided to go on to the next village, which required that we finished the toughest climbing part of the trek, called the 28 bends. These switchbacks seem to take forever but are to our opinion really not as hard as the sections before. It helps that the reward for this climb is amazing. After the last bend you arrive at the highest point of the trek and have a fantastic view over the rest of the gorge! A smart businesswoman put a stick across a side-path to the best view and was asking money (10 Yuan) to pass. It always feels a bit weird to pay for something like that, but in this case it was totally worth it.

We then descended to the village where we would be staying for the night at the Tea horse Guesthouse. When we arrived there, the group of Dutch people that we had met in the bus, took off to reach the next guesthouse before dark. Very brave of them! For us it was time to have a beer and dinner on the rooftop terrace together with a really nice Spanish couple. With this view, this must be one of the most beautiful spots that we had dinner, ever!

The next day, we knew we had an easier route in front of us. 12 kms of mostly downhill paths until we reached the Middle gorge. After one hour, we decided to have a cup of tea at a place famous for their “toilet with the best view in the world”: Halfway Guesthouse. And we admit, the view is not bad at all. In general, from this point on, the views of the gorge were competing with each other to be the most spectacular. And even though it was a little bit cloudy, hiding the 5000m mountains on the opposite side of the river now and then. Our jaws dropped when the clouds cleared again. Spectacular! 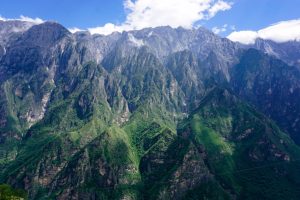 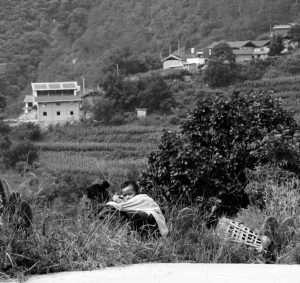 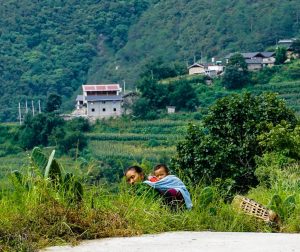 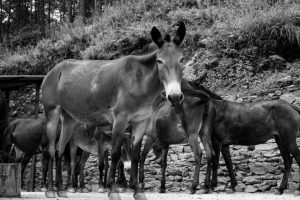 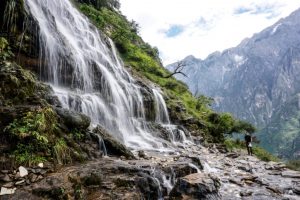 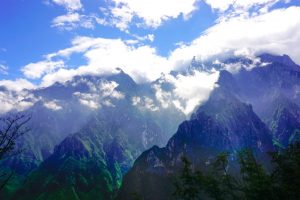 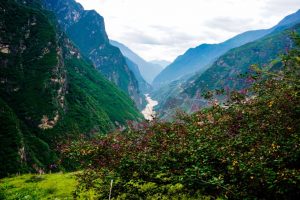 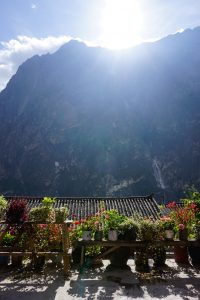 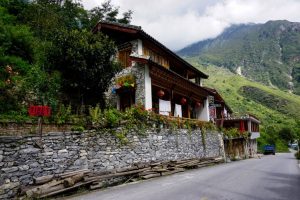 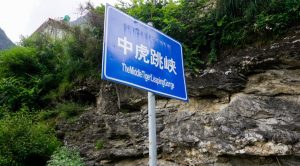 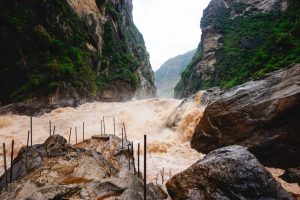 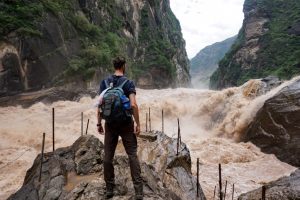 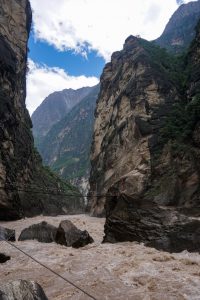 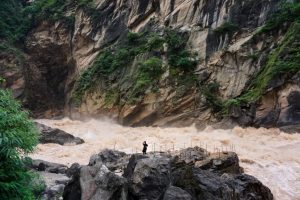 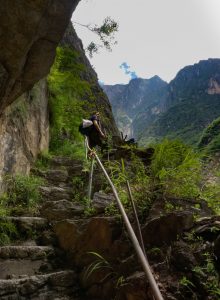 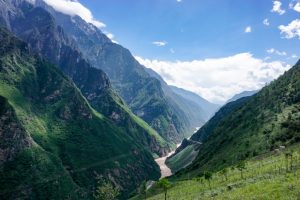 We further descended through bamboo forests and meadows until we reached Tina’s guesthouse. This is the point were the bus leaves and the trail to the tiger-leaping stone starts. We bought our bus tickets for the next day and had a brief chat with the Dutch people that did the two day hike. While they got on the bus, we finished our hiking with a short walk to the lovely Tibet Guesthouse. This guesthouse in a small village called the Walnut garden, was said to have great, real Tibetan food. And after a good Chinese Shangri-la beer, we shared dinner with a Swiss-Hong Kong couple. It was indeed delicious. Especially the buckwheat pancakes with Yak cheese and butter were to die for! Also the fried potato pancake and the dried Yak meat were delicious.

The next day, we finished off our trek by descending to the Tiger-leaping stone. A long steep decent, which makes you realize how deep this gorge really is. Once you reach the side of the river, you can pay to stand on the real stone, which you reach via a suspension bridge or you go to a different stone without the need for the bridge for free. Once on the stone, the sheer power of the water rushing past is incredible and makes you feel very small and humble. After a steep climb up again, it was time for us to sit back and relax before the bus would take us back to Lijiang. Sitting there with the view of the river below and the mountains above, you realize how powerful nature is and what a very special and peaceful place this is. The Tiger Leaping gorge hike is rightfully one of the must do’s in China. It for sure made us long for more and got us excited for the weeks to come!