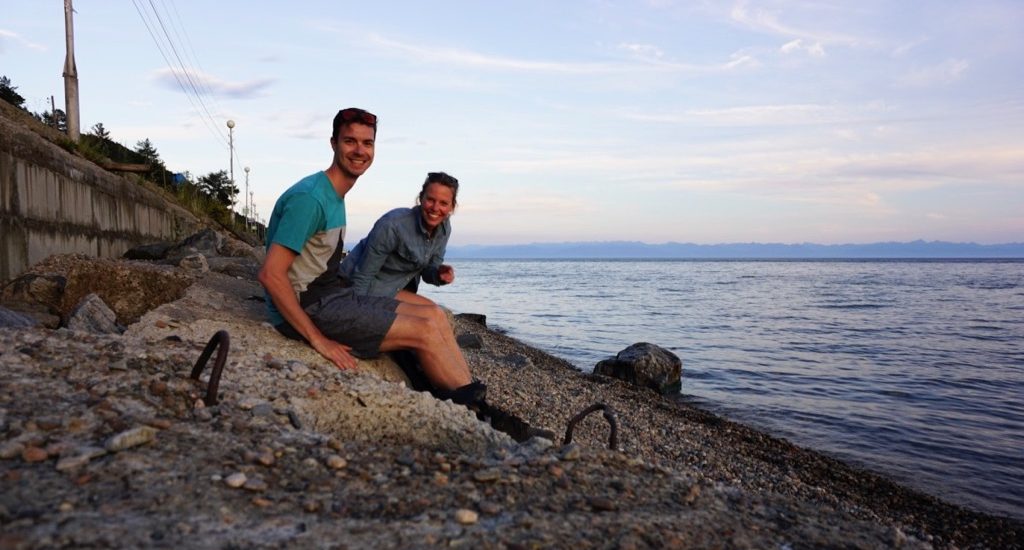 One of the main reasons to go to Russia was witnessing the mighty Lake Baikal. Banana-shaped, 636 km long and 60 km wide, it contains almost one-fifth of the world’s fresh water. In winter, the rocky hills will be covered with snow and the lake will be frozen. This ice, created by the Siberian winter, is thick enough to drive over it.

Our first meeting with Baikal was in Listvyanka, approximately 70 km from Irkutsk and easily reachable by Marshrutka (minibus). For most people on the Trans-Siberian trains, which are on a tighter schedule, this is the only possibility to view Baikal. By coincidence, we met another Dutch/Belgian couple from Ghent (they do exist!) in our hostel in Irkutsk and we can imagine that they were disappointed by Listvyanka. It certainly feels like a tourist trap, with prices matching (or exceeding) Moscow standards and many tacky hotels and restaurants. Busses full of Chinese tourists come and go and Russian people, like you see them at the Turkish Riviera, occupy the rocky beaches. 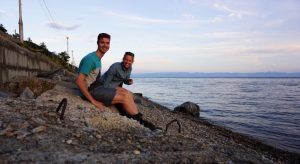 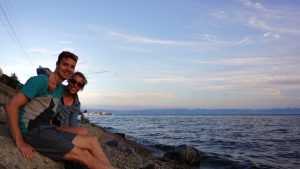 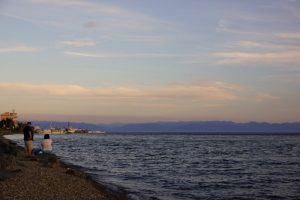 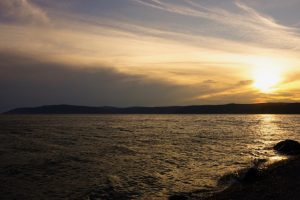 As we have already written in our previous post on Irkutsk, we cancelled our (expensive) hiking tour and decided to do everything on our own. We spend the night in Belka Hostel, which, due to its location higher on the hill, was already an exhausting trip to get to with our heavy backpacks. We planned to take the hydrofoil ferry to Bolshiye Koty to do some short hikes in the area. Jane, the receptionist at Belka, suggested to leave our bigger backpacks at the hostel and hike towards Bolshiye Koty. We took her advice and the next morning we packed our daypacks with lots of food, water and some clothing and started our hike.

The Great Baikal Trail is created by volunteers and is already finished on some parts of the western shores of Baikal. The first 5 km from Listvyanka take you through a thick forest on a rather steep path. It is the toughest part of the track. If you plan to do a short tour on the GBT to see the lake, think twice to take this route, because you will only see forest. After approximately 6 km, you finally see the lake and it takes you 2 km more to be able to dip your toes into it. From here on, we walked along its shores. The view here is fantastic and we were lucky with the weather. For us though, the hike was challenging due to its length. After 8 hours and almost 23 km, we finally reached the small village of Bolshiye Koty. To be honest, my feet could not have carried me any further that day. We then spent two nights in Lesnaya 7 hostel, a very basic accommodation, with hard beds, but a good shower and small kitchen, which was all we needed. Owner Alexey is a very friendly person to talk to while you enjoy the view from the terrace. 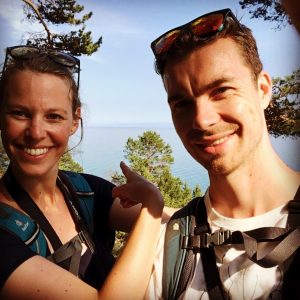 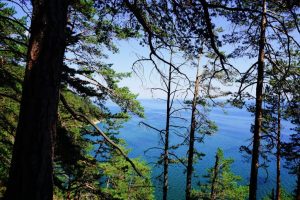 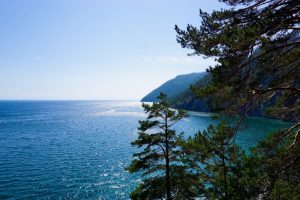 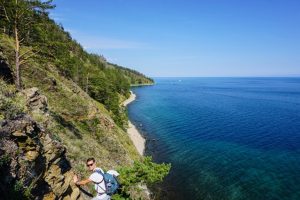 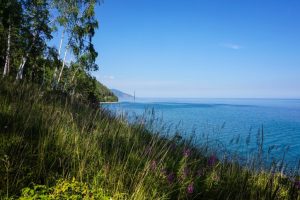 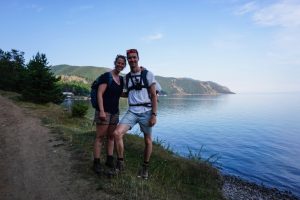 The next day we decided to do a short hike towards a nearby beach, approximately 3 km to the north of the village. Since every inch of our bodies was sore from the hike (and the hard beds), a relaxing day was necessary. In the evening, we prepared a simple, but well tasting, meal which was completed with some canned meat that we got from Nadia, a guide that was hiking with two Danish girls; Emma and Victoria. We met them at Lesnaya and joined them for dinner.

After a lot of rain during the night, we woke up to a sunny Bolshiye Koty. This made us decide to go back to our lovely beach. Before the ferry arrives and the hikers from Listvyanka arrived, we almost had the beach to ourselves and did a little sunbathing in our undies. Since a visit to Lake Baikal in summer without jumping in would be a shame, Koen was the first to take a dive into the water. Obviously, I couldn’t stay behind to try the freezing waters (never warmer than 15 degrees Celsius). 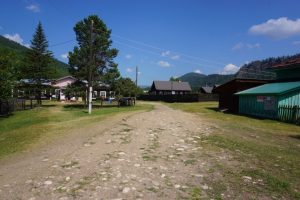 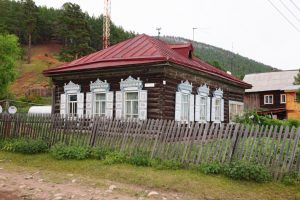 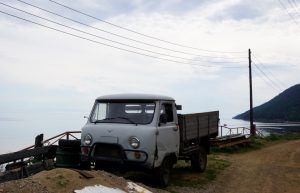 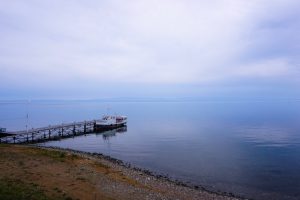 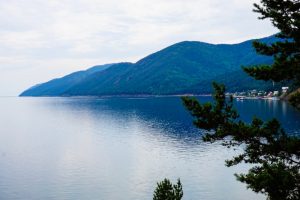 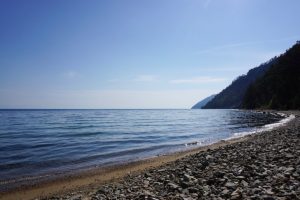 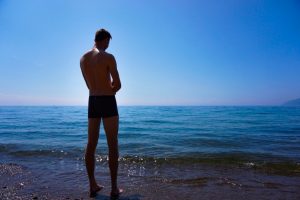 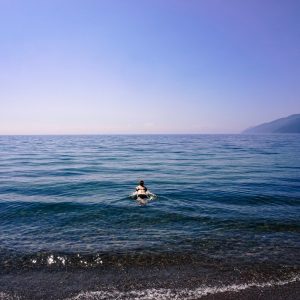 After a great day, it was time to take the hydrofoil ferry back to Listvyanka. This became a little stressful, since we didn’t have pre-booked tickets and only the remaining seats are being filled in by the first people on the pier (in this case only 4-5 of the 20 waiting). Life-saver Nadia helped us to score two scarce tickets before/during boarding and within 25 minutes, we were back in Listvyanka. We picked up our luggage and when arriving at the bus stop, the waiting game could begin in the long line for the bus back to Irkutsk (beautiful weather on a Sunday doesn’t only give traffic jams on the E40, we noticed). When we finally caught a bus we were in for a unique experience. Apparently, avoiding traffic jams by driving over unfinished highways etc. can be considered normal.

To finish off our Russian adventure, we had to take one last train and it was probably the one we had been looking forward to the most. The train between Irkutsk and Ulan-Ude runs along the south and south-east part of Lake Baikal to finally steer east for the final 70km to Ulan-Ude. We booked our tickets for this day-train in Platzkart (3th class). We decided on this partly to have had the “true” trans Siberian experience of traveling in a carriage of 60 berths and partly to save some money. Since it was only 7 hours in the train, we would not need to sleep, so when it would be terrible, it would not be too bad. The train journey turned out to be very nice, with amazing views of Baikal and the surrounding mountains. Also traveling Platzkart turned out to be a pleasant experience, in contrast with the “horror“ stories we had heard. We shared our table with Анастасия (Anastasia) and her 5-years old son and 3-years old daughter. The rest of the carriage was full, but not as chaotic as we had expected.

Bye Baikal, you were great!

Some tips for Baikal:

To let all the impressions of Lake Baikal sink in a little, we then spent our last days in Russia by relaxing in Ulan-Ude before we took the bus to Ulaanbaatar, the capital of Mongolia. 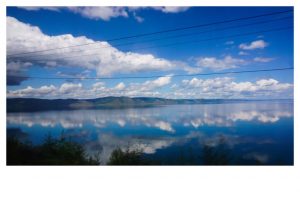 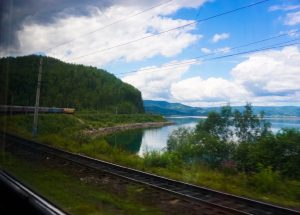 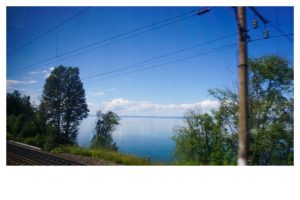 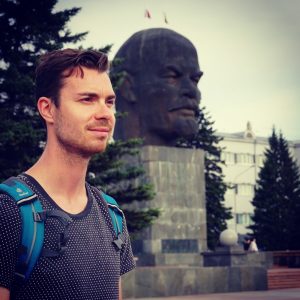 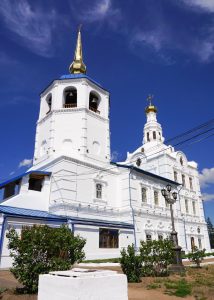 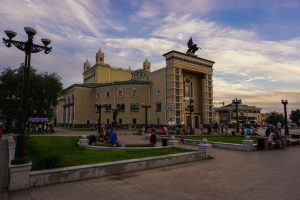 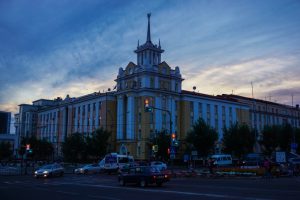 This public bus, that we pre-booked with the hostel, would bring us in around 12 hours from Ulan-Ude to Ulaanbaatar. After 4 hours we reached the border and the border procedures could begin. This meant at the Russian border getting off the bus and take all of our luggage out of the bus to get through the very strict Russian immigration, getting on the bus again with all our belongings to drive 200 meters and repeat the same with the Mongolian border control. For 40 people this took us around three hours to complete.

For us this went smooth, but the only US citizen on our bus needed to give some more explanation to the Russian officials. Think bad C-movie scene with 5 Russians (big rimmed caps and all) shouting at him, asking what he had been doing in Russia and where he was going next. After ten minutes, he could go. A little shaken, but with the right stamps in his passport.

After this administrative pause, the bus ride would normally be smooth sailing through the north of Mongolia. Unfortunately, our bus had some engine troubles, so we needed some more stops. This was not so bad, because the first impressions of the Mongolian landscape were really amazing, After 14 hours, we finally arrived in UB!

Ready to begin the Mongolian adventure!